Skizzz Game is a free awareness game that aims at raising awareness towards security rules and behaviours on ski and snowboarding slopes.

This interactive awareness tool is available in French and English and can be played:

. on a computer (PC or Mac) thanks to the website dedicated to the prevention of accidents made by the French Ministry of Sports

. on a Android smartphone or tablet via Google Play

. on an iPhone or an iPad via the App Store

Following the official launch of Skizzz Game, the Ministry of Sports has published a press release and the French government has posted information on it official Facebook and Twitter accounts.

Skizzz Game mainly targets kids and teenagers. Currently in French and English, it aims at informing and raising awareness towards security rules and behaviours applying to skiing or snowboarding.

The number of accidents is indeed important among the young public who often does not know the risks or underestimate them, even on official slopes:
- Risks linked to inadequate equipments,
- Collisions or falls linked to fatigue or a lack of attention to other skiers or snowboarders and/or a lack of respect of security signage on the slopes.
- Sunburns... 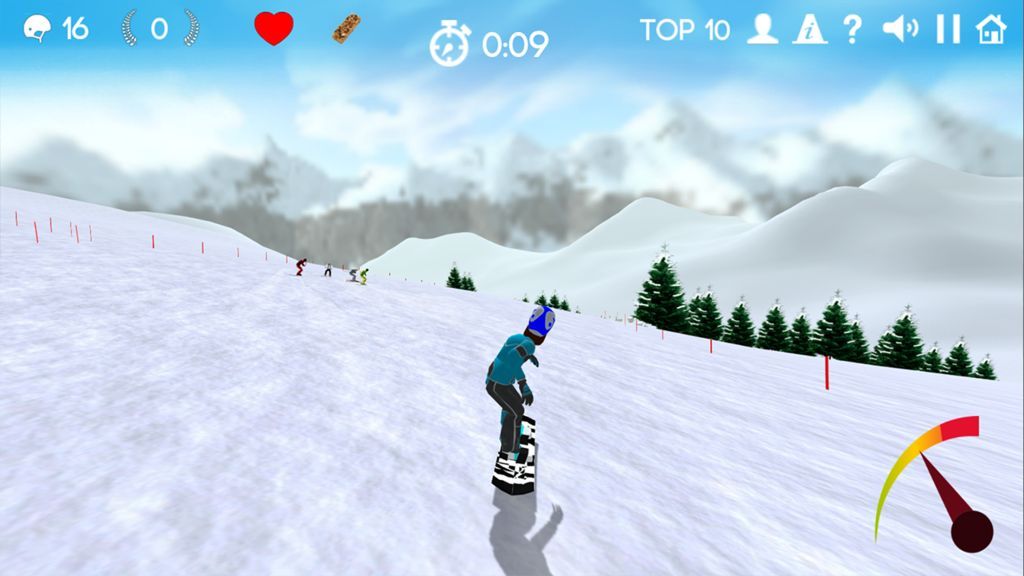 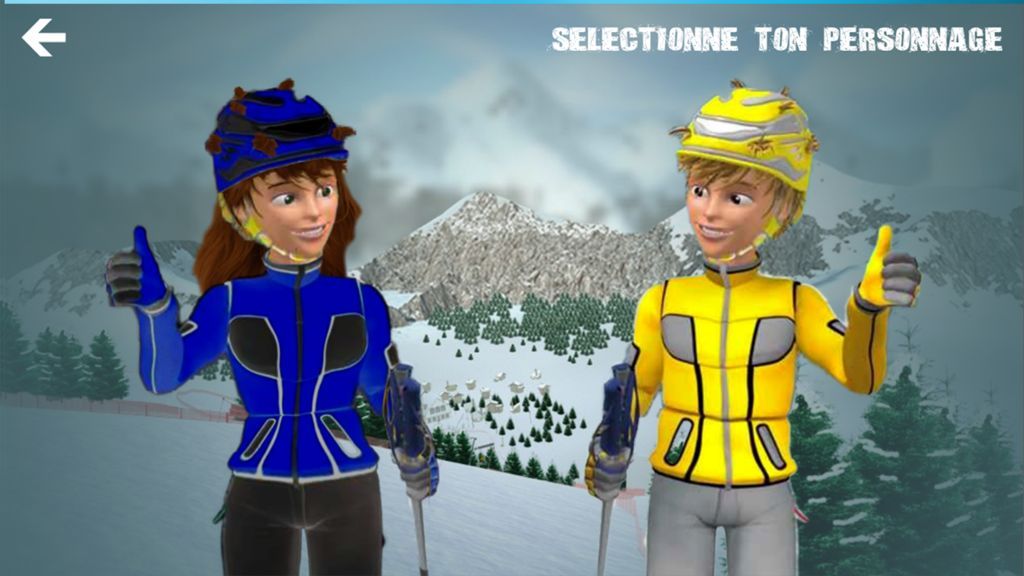 ...to understand and adapt one's behaviour

In this immersive video game, the player embodies a teenager. He chooses his avatar, boy or girl. His mission is to take decision and to behave according to security standards during a virtual day of skiing or snowboarding .

The game is structured along two successives phases :

Skiing/Surfing phase : choice of a slope between a slalom, an open slope or a snowpark, respecting priority rules, signs, stopping locations, assisting other skiers or snowboarders...

Each succesful mission increases the score of the player. On the opposite, each negligence in respect to security rules lowers his/her score.

At the end of the game, the player can optionally login to save his/her score and participate in a leaderboard of the 10 best players.

A multiplatform game in 3D

Skizzz Game can be played for free on computers, tablets and smartphones:

. On iPhone or iPad with the mobile application avaiable on the App Store,

. On Android tablets and smartphones with the mobile application avaiable on Google Play.

. On computers (PC or Mac) via the website dedicated to prevention made by the Ministry of Sports (and City and Youth). This website proposes as well additional information on security issues through pieces of advise and videos made for the young public.

Players who register can keep their scores and track their evolution. They can play always on the same device or not. 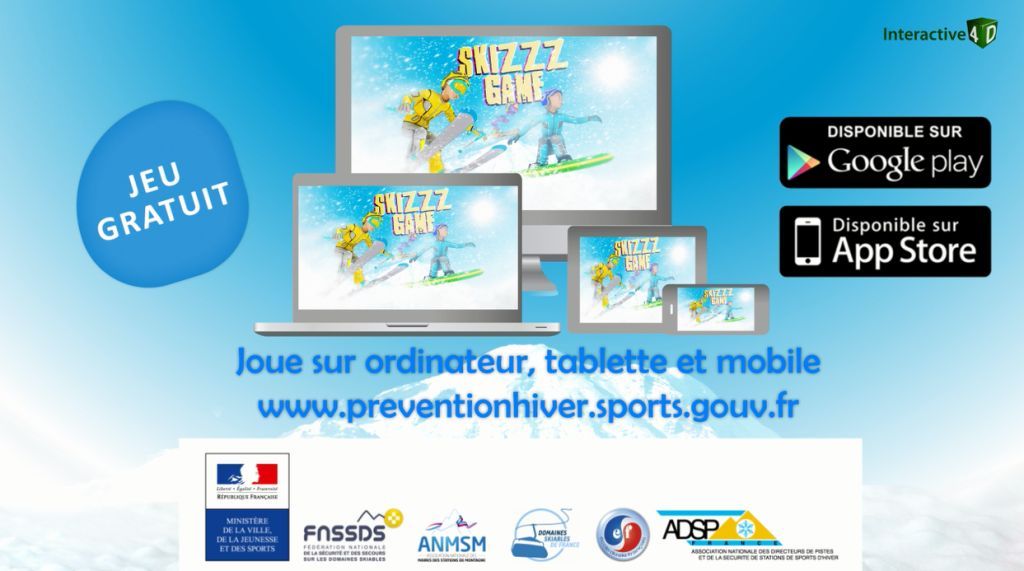 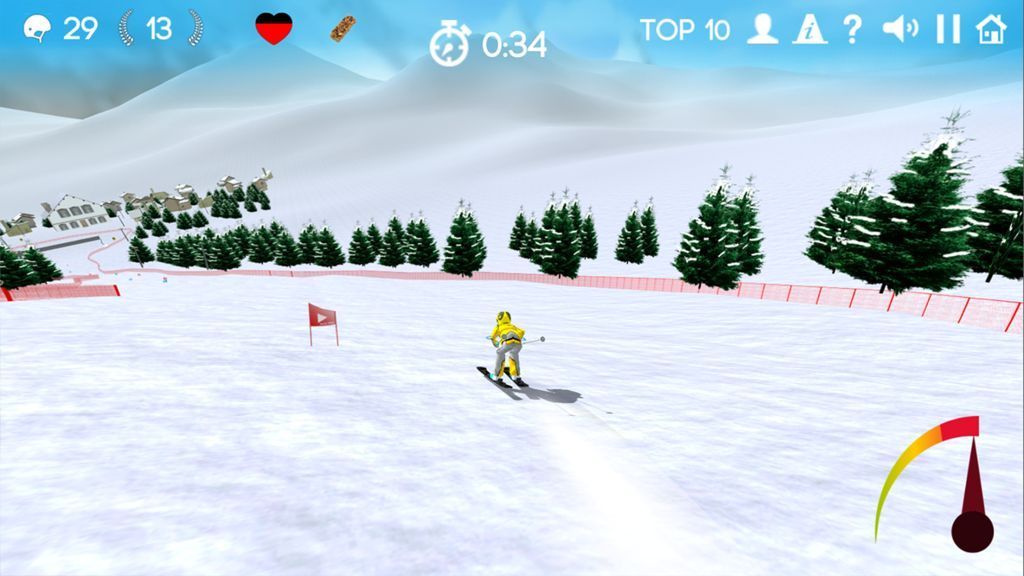 Interactive 4D has integrated in the game the true 3D terrain of several slopes so as to get as close as possible to the reality of a winter ski resort.

Parallel to this generic version, other versions can be customized to reflect the real 3D configuration of a mountain resort : shape of the mountains, ski slopes, architecture,  trees, environmental diversity...

This customized game can be made accessible through the website of a ski resort that can use the game as well as a tool:

. for touristical promotion: enabling future visitors to discover some aspects of the resort through its virtual representation before visiting it in real life,

. for onsite touristical animation: the game can be proposed in the ski resort itself on public computers or touchscreen displays and serve as a base for challenges between players. As the scores of the players can be stored in a leaderboard, gifts can be given to the best players.